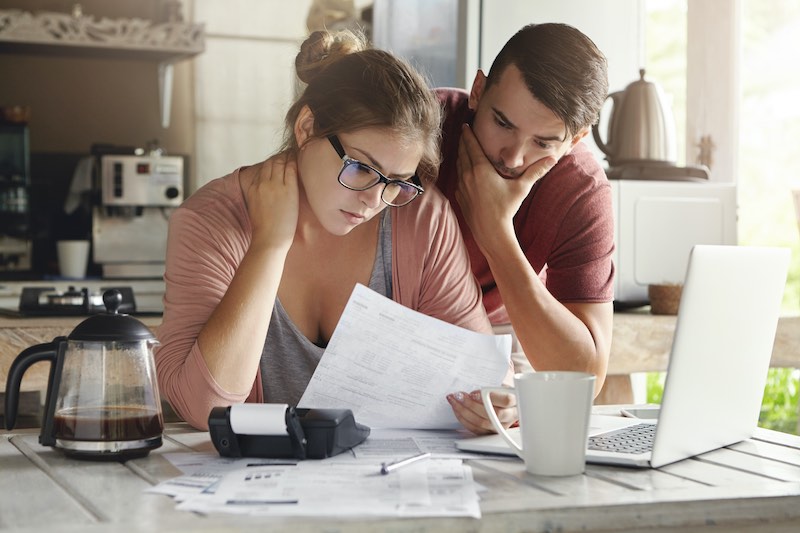 A third (34%) of Brits have turned to overdrafts, credit cards, payday loans and “buy now pay later” (BNPL) schemes to pay for essentials, according to a new report from OpenMoney.

The financial advisors, in conjunction with YouGov, queried 2,000 Brits in early March, before the coronavirus pandemic shuttered offices, decimated businesses and left millions furloughed or out of work. But its second annual Advice Gap report suggests that our personal finances were in a perilous state even before the pandemic ramped up on our shores.

The percentage of Britons relying on short-term credit, including overdrafts, credit cards and payday loans, for essential spending was up slightly between 2019 and 2020, from 33% to 34%, OpenMoney’s report revealed. However, the number of households without debt fell more steeply, from 44% to just 40%. That means the majority of us were saddled with debt even before the virus led us to accumulate an additional £6 billion, according to estimates from charity StepChange.

To cope with financial difficulty, Brits are most likely to curb their spending, with more than half (55%) of respondents telling OpenMoney they’d done this. That’s down slightly from the 60% who reported cutting back outgoings last year.

41% handle financial hardship by budgeting more strictly, while 33% dip into their savings to get by. Meanwhile, 28% report borrowing from family and friends, up from 27% last year.

Anthony Morrow, chief executive of OpenMoney, said the figures suggest households were experiencing lean times even before the pandemic.

“It is revealing that the number of people cutting back on spending and budgeting more has fallen from last year, while those borrowing on credit and from friends and family has risen. This could suggest there was already less fat to trim in household budgets even before the impact of coronavirus.”

He also raised the alarm about the reliance on expensive short-term credit options, including the “buy now pay later” schemes like Klarna which have proliferated across online shopping sites.

“With rising household debt, we are particularly concerned about over-reliance on short-term credit for day-to-day spending, especially new forms of credit like buy-now-pay-later schemes and workplace lending services which make it very easy to take on debt without fully thinking through how you will pay it back or the impact on your credit rating if you don’t,” he said.

OpenMoney is urging the government to strengthen consumer credit law and standardise regulation for all types of unsecured debt, including BNPL schemes, so people are fully aware of the implications before taking on this debt.

It also wants the government to bring forward the Breathing Space scheme, which will allow people with problem debt to freeze interest, fees and enforcement for 60 days while they receive professional financial advice. The scheme is due to implemented next May.

But despite rising debts, Britons are reluctant to pursue professional financial advice, the report found. Just 10% have taken paid-for financial advice in the last two years, with many dismissing such services as “expensive,” “untrustworthy,” and even a “scam,” “con,” or “rip-off.”

OpenMoney also raised concerns about households being clobbered with debt from mortgages, loans and credit cards from which they have sought holidays during the coronavirus pandemic.

“When the payment holidays end, customers are likely to face larger monthly payments, or have to pay their debt back over a longer period and potentially paying more in interest, which could drive more people into financial difficulties,” Morrow said.