Almost half of Brits do not know the majority of items that are covered by their contents insurance policy, our research has found.

We can reveal that while 47% of people in the UK are unaware of what is covered under their home insurance, a similar proportion (46%) don’t keep any receipts or pictures of their valuable items. Even fewer (43%) update their contents insurance policies to include valuable items after they’ve bought them.

Home contents insurance provides a helpful safety net if your house gets broken into while you’re on holiday, but it definitely shouldn’t be cause for complacency. Below are some of the most common measures that people in the UK are taking to keep their possessions safe while they’re away: 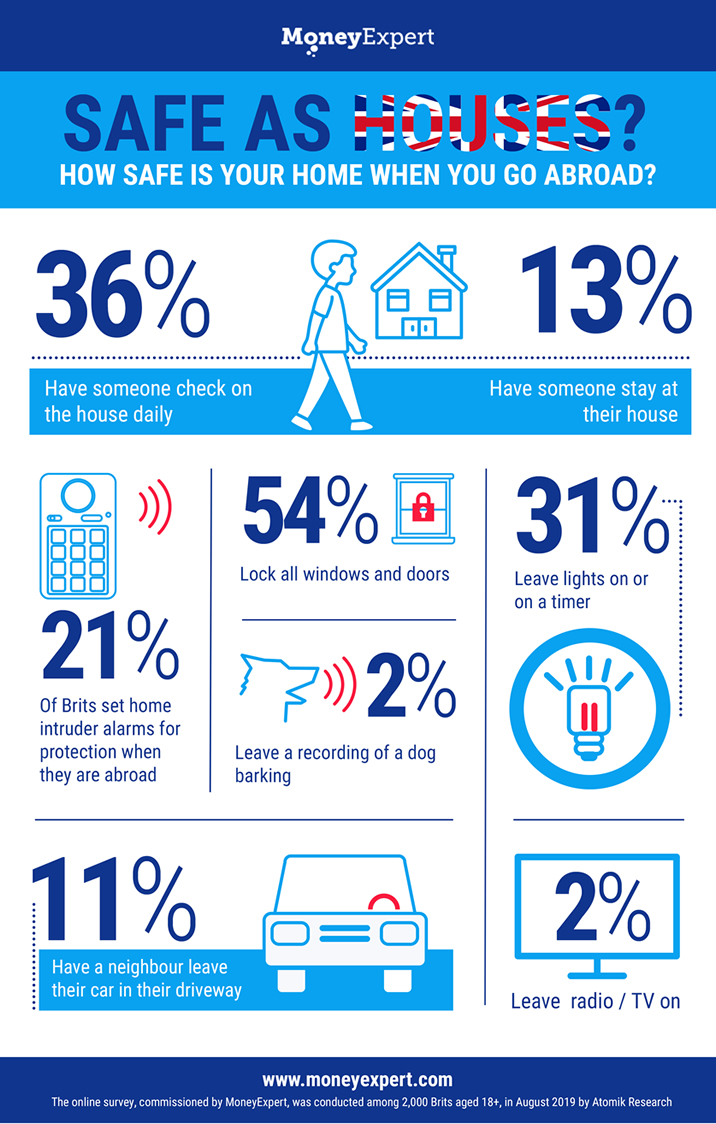 The most common measure that people take, perhaps unsurprisingly, is locking all doors and windows – something that 54% of respondents claim to do. Over a third (36%) of people ask a neighbour, friend or family member to check in on their home every day whilst they’re abroad, and 31% leave lights on in their home to make it seem like it’s occupied.

Some of the more uncommon methods that people are using to deter burglars include leaving on a recording of a barking dog or keeping the TV or radio on, with 2% of respondents admitting to doing each.

28% of people admitted to having made a claim on their contents insurance before, and 17% of people said their home had been burgled or broken into in the past. It’s understandable, then, that many are taking extra precautionary measures. However, the research revealed that 61% of people are underestimating the value of their most prized possessions, potentially leaving themselves out of pocket if they had to make a claim.

“It’s vital that people know the true worth of what they have in their homes,” said Jason Smith of Money Expert. “Taking a guess on the value of your contents could cost you money in the long run if you make a claim and insurers think you are under insured. This can result in you receiving a pay-out that is much lower than the value of your items.

“Homeowners, and those who rent, need to be careful of under-estimating the value of what’s in their home. It could easily bite you on the backside if you have a burglary or a fire and find you are not properly covered.”

Regionally, those in the East Midlands tend to be more careful when it comes to protecting their homes, with 42% of people there having installed an alarm compared to just 15% in East Anglia. Meanwhile, in London, which has some of the highest burglary rates in the country, 15% of people admitted to getting a guard dog, and 14% have installed a video doorbell.

The most common item to be covered by contents insurance policies is jewellery, which makes up 32% of all items insured. Meanwhile, technological equipment makes up 27%, home appliances 19% while furniture and antiques make up 14%.