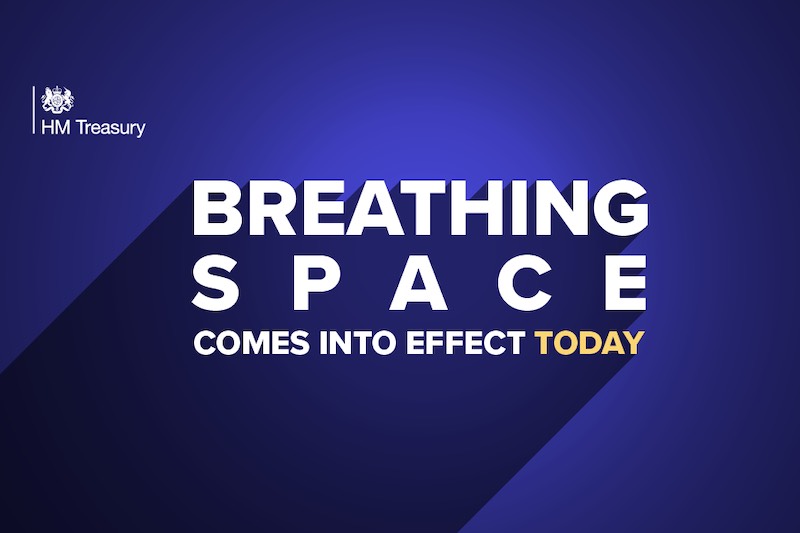 A new debt respite scheme, giving people struggling with problem debt two months to get their finances back on track, launched today.

Under the Breathing Space scheme, people in serious debt will be given a 60-day grace period during which interest and penalty charges on their debt will be frozen and they won’t face enforcement action from their creditors. During this period, debtors will receive professional advice to develop a sustainable plan to get out of debt.

The rules, in effect in England and Wales, are predicted to help 700,000 people in the first year, rising to 1.2 million per year in the tenth year of operation. Between 25,000 and 50,000 of those to benefit are expected to be individuals receiving mental health treatment.

The Money Advice Service has estimated that even before the coronavirus crisis, 8.3 million people in the UK were over-indebted. The pandemic, which has caused hundreds of thousands of job losses, has exacerbated the problem. Debt charity StepChange estimated that the number of people in severe debt doubled between March and November 2020, to 1.2 million. In addition, by the autumn 7.1 million people had fallen behind on bills or borrowed money as a result of the crisis.

John Glen, Economic Secretary to the Treasury, said the new scheme “will give people a breathing space from charges, distressing letters and bailiff visits, so they can tackle their problem debt with support from a professional debt advisor."

“And to help people going through a mental health crisis, which is too often linked to financial problems, we’re bringing in stronger protections lasting beyond the end of their crisis treatment,” he added.

Most debts are covered by breathing space legislation, including credit card and store card debts, personal loans, payday loans, overdrafts, utility bill arrears, mortgage or rent arrears and council tax arrears. However, secured debts, such as mortgages and car hire purchase agreements, aren’t covered, along with any debts incurred through frauds and any liabilities to pay fines imposed by a court for an offence.

Respite periods will last up to 60 days but could be shorter if they’re cancelled by a debt advisor or court. The grace period can be longer for someone being treating for a mental health crisis, covering the period in which they’re in treatment, no matter how long it lasts, plus 30 days.

Under normal circumstances, you can only get breathing space once every 12 months. However, there’s no limit to the number of times you can enter a mental health crisis breathing space.

Creditors are also barred from pursuing enforcement action during the breathing space period. This means they can’t force you to pay the debt; contact you about enforcing the debt, including sending threatening letters or dispatching bailiffs to your home; apply to the Department for Work and Pensions for deductions to be taken from your benefit payments; seize or sell your property or goods; start legal proceedings against you; disconnect your gas or electricity or install a prepayment meter to recover energy debt.

If you can, you should continue making payments to service your debt during a breathing space. Breathing space is not a payment holiday. It doesn’t suspend your debt, just freeze interest and enforcement.

Additionally, you must keep paying any ongoing liabilities, including for your mortgage or rent (but not mortgage or rent arrears accrued prior to the breathing space); any insurance policy; taxes, including council tax, duties and National Insurance contributions; and utility bills. If you don’t keep up with these payments, your debt advisor may cancel the breathing space, unless you’re being treated or have recently completed treatment for a mental health crisis.

If you don’t currently have a debt advisor, you can seek one out from Citizens Advice, StepChange, National Debtline, CAP and other similar services.

To deliver the scheme, the Treasury has partnered with the Insolvency Service, which will maintain an electronic service used by debt advisors to start, update and end a breathing space period. The Service will send notifications to creditors and their agents about a breathing space so they pause interest charges and enforcement.

Joanna Elson CBE, chief executive of the Money Advice Trust, the charity that runs National Debtline and Business Debtline, said: “We are pleased to be supporting the launch of the Breathing Space scheme, which is a major milestone in improving the help available to people struggling with debt.

“Breathing Space will provide a powerful incentive for people in debt to seek free debt advice—with vital protections from interest, charges and creditor action to give people the time and space they need to begin to deal with their financial difficulty.”

Phil Andrew, chief executive of StepChange, said: “We are delighted to see Breathing Space going live. Giving people the statutory protection of a time period to help them begin to deal with their debts is a huge step up from the previous voluntary, patchy approach. StepChange has been at the forefront of campaigning for Breathing Space since 2014, and we are pleased the Government has taken our evidence and client experience on board when putting the scheme into practice.”