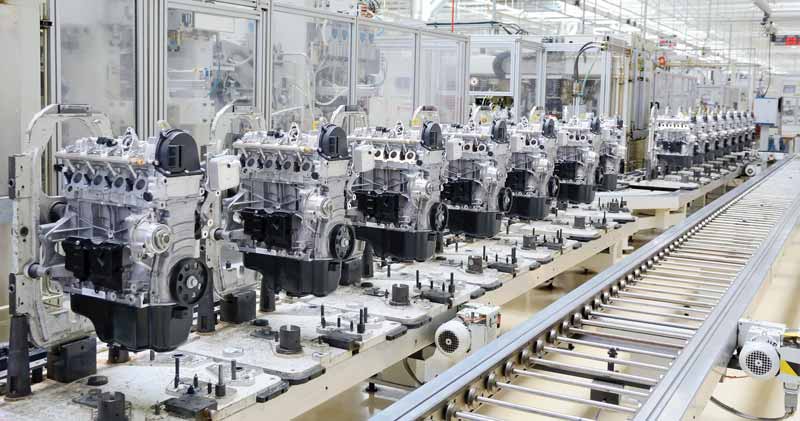 An industry survey has revealed that manufacturers in the UK managed to increase their production in the last three months, and are feeling positive about the future levels of both domestic and overseas demand.

The CBI, a business lobby group, carried out a quarterly survey of bosses throughout the industry, which revealed that a higher number were posting reports of increases in output than decreases in the last three months. This represents the best performance for the sector since July last year. However, even though the 472 manufacturers that were asked are feeling good about the future, the last three months still showed a fall in the number of exports.

A slowdown in international trade, along with a decrease in demand from the toiling North Sea oil and gas industry, has led to a slowdown in factory output in recent times. These pains in the manufacturing sector have been felt worst of all in the steel industry, which is currently facing thousands of job cuts this year.

This slow growth in the manufacturing industry, coupled with unpredictable trade in construction has resulted in consumers driving the majority of British growth via the services sector. Wednesday will see the release of growth figures for Q1, and many economists believe that the figures will reflect the difficult time that the economy is experiencing. A recent Reuters poll is predicting that economic growth fell from 0.6% to 0.4% at the end of 2015.

The CBI has stated that even though there are some positives to be found in its recent survey, such as an increase in employment, the overall outlook still doesn’t look great.

Rain Newton-Smith, the director of economics at the CBI, said:

“Manufacturing has yet to pick up after a flat start to the year, with falling orders providing little impetus for production. While expectations for the upcoming quarter are encouraging, manufacturers are still facing sizeable external headwinds.”

A drop in the value of the pound has led to some exporters seeing small gains; the currency dropped sharply after Boris Johnson announced his support for the Brexit campaign- fuelling fears about Britain leaving the EU. However, even though this drop has made exports cheaper, it has also increased costs for manufacturers who rely on imports from other countries.

“The falling exchange rate should give some support to manufacturers, and investment intentions are strong.”

The research went on to show that total new orders fell slightly in the three months leading up to April, which equalled the rate of fall in the quarter previous. It is believed that the latest fall was caused by a decrease in the orders for exports and an unchanged number of domestic orders. However, more manufacturers believe that demand will rise over the next three months, than believe it will fall.

The CBI calculates demand, activity and sentiment through a variety of balances.

Katie Allen of the Guardian reports:

“The balance for output edged into positive territory for the past three months, as 24% of businesses reported a rise in volumes, and 23% a decrease. That resulting balance of +1% compared with -2% in the three months to January. The orders balance was steady at -4%.  For April alone, the orders balance improved to -11% from -14% in March.”

The CBI continued by saying that many manufacturers were optimistic that they would be investing in plant and machinery, and buildings in the year to come- the body said that the survey had indicated “robust levels” of spending were on the horizon.

However, there have been other reports, which indicated that other businesses have put off spending until the outcome of the EU referendum. This has prompted the Bank of England to warn that growth could fall even further over the months to come.

“In contrast to the message from other surveys, Brexit risk also does not appear to be dissuading investment.

“It is too soon to conclude, however, that the manufacturing sector is out of the woods. Sterling will bounce back if, as we expect, the UK votes to remain in the EU in June. Meanwhile, the domestic market for manufactured goods likely will remain weak as growth in consumers’ real income slows in response to rising inflation and intensifying austerity.”

“Firms’ outlook for the upcoming quarter is a little firmer. Both output and demand are expected to grow, with the latter underpinned by strong expectations for export orders,” the CBI said.