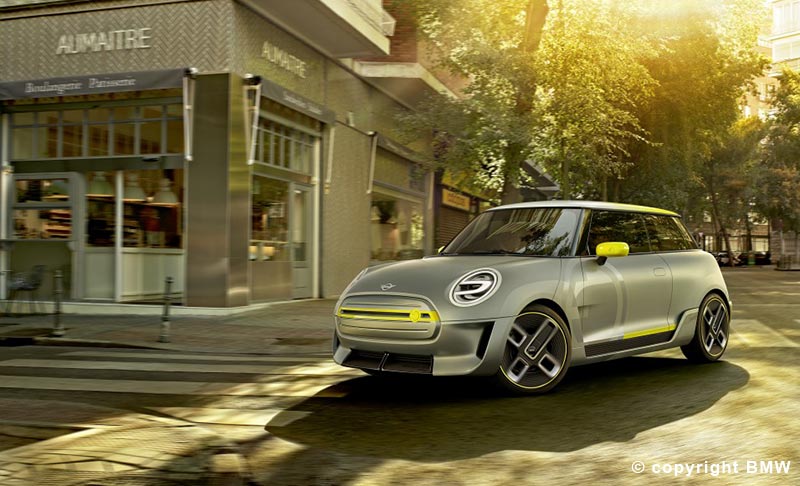 BMW have released the first images and details of their new Electric Mini prior to the car’s debut at the Frankfurt Motor Show from September 16th. This follows BMW’s July announcement of plans to put the car into production at its Cowley plant in Oxford in 2019.

This car is the product of a decade of work that BMW has put into electric vehicle technology. This began in 2008 with the testing of the prototype Mini E electric car. Over 600 Mini Es were tested around the world, providing invaluable data on the usage of all-electric cars. Additionally, the findings from this trial were instrumental in the development of the BMW i3. In June the company’s first ever hybrid production model, the Mini Countryman Plug-in Hybrid, went on sale, before the announcement of its first fully electric production model in July.

BMW said: “Almost 10 years after Mini E laid the foundations for production-standard battery electric vehicles within the BMW Group, Mini is now offering a window on the future of urban electric mobility.”

Under the company’s ‘NUMBER ONE > NEXT’ strategy, which is the company’s plan to spearhead the upcoming electric vehicle revolution, BMW aims for electrified vehicles to account for between 15-25% of its sales by 2025. To facilitate this, from 2020 onwards, BMW will offer fully electric versions of any new Mini or BMW models, as long as there is sufficient consumer demand.

The company has stated that the prototype unveiled at the Frankfurt Show will be ‘very close’ to the final production model, which BMW have said will have a range of around 250 miles. This will drop significantly if the car is driven close to the limits of its roughly 120mph top speed, but BMW claim that replenishing 80% of the battery life will take just 40 minutes of charging.

Details of the manufacturing process have also been shared. For example, that 3-D printing will be used to create some components of the car, such as its aerodynamic inlays. The assembly of the car's electric drivetrain - consisting of the motor, gearbox and battery pack - will take place in Germany, before these drivetrains are shipped to BMW’s plant in Cowley and affixed to the cars. The main assembly of the battery-powered vehicle is set to begin at the Oxford factory in 2019. The factory in Cowley already accounts for over 60% of the 360,000 Minis made annually, with the remainder being produced in the Netherlands, and boasts a workforce of 4,500. In total, BMW employs 24,000 staff in the UK across all of its dealerships and factories, such as the Rolls-Royce factory in Sussex. BMW’s investment in the UK is prudent as Britain accounts for 20% of worldwide Mini sales, making it the largest market for Minis in the world.

When the car goes on sale in 2019 it could cost as little as £20,000, as long as Government grants of up to £5,000 for purchasing low-emission vehicles remain available. The car will also be cheap to run with its mains charging, which equates to spending roughly 2p per mile. Car insurance ought not to be a problem either, as plenty of insurance providers are now recognising the increasing demand for electric vehicles and providing appropriate cover accordingly. As a further reason to go green, many car insurers now offer incentives and discounts as part of their specific electric car insurance packages. On the whole, this means that insuring an electric car tends to be cheaper than insuring petrol cars.

What kind of insurance do you need as a young professional?