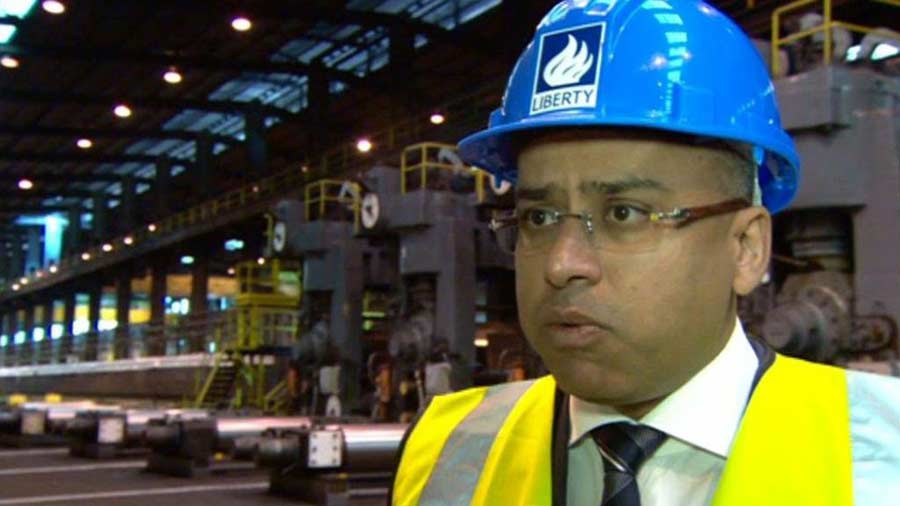 Sanjeev Gupta, who is lined up as a potential buyer for the Port Talbot steel plant in Wales, has set out terms under which he would consider going through with the purchase, including calling for financial help from the government.

Mr Gupta, managing director of commodities group Liberty House, has already purchased two of Tata’s steel plants in Scotland and has plans that he believes could save the Port Talbot site from permanent closure and prevent almost the entire workforce from being made redundant.

He has said that if he goes through with the acquisition, he have to transition the basic manufacturing process in the plant, converting the existing 4,000 blast furnaces into electric arc furnaces that melt down recycled scrap steel instead of working from imported raw materials.

In doing so, he argued, he would be able to maintain the plants workforce, redeploying workers around different parts of the business once the transition is made.

He said to the BBC’s Today programme: “What anybody looking at this prospect must contend with is: ‘What is the main problem of the viability of this business?’ The main problem we see is the blast furnace, because they are importing all their own materials.”

He said separately: “We feel we have an alternative suggestion [to the current blast furnace model] which is to still make hot metal but to make it from local raw material rather than imported raw material.”

“It will take years to make this transition from blast furnaces to arc furnaces,” he added, “but there has to be a long term plan.”

Currently, the Port Talbot plant is running at a loss of around £1 million every day and transitioning these “loss making” blast furnaces, he said, would be key to turning the site around and making it profitable once more.

It would also reduce the environmental impact of the plant since, as Mr Gupta argued, “making new steel doubles our carbon footprint”.

“There is a way of making steel in the UK which has a much lower carbon footprint than what we currently do.

“At the moment we export our scrap and bring back steel – we import 6 million tonnes of steel. I would like to see more of that being made here. So our commitment would be not just to produce what is currently produced but actually to expand production eventually in due course.”

This is likely to please business secretary Sajid Javid who said in an interview with Andrew Marr that he does not “want to live in a country where we import all our steel”.

Javid has been widely criticised for his response to the steel crisis but has defended his approach, maintaining frequently that “we will do everything we can to keep steel making at Port Talbot”.

Javid met with Gupta yesterday to discuss the latter’s plans and requirements for his potential purchase of the Port Talbot plant.

Jaivd said that the government would be “using all possible ministerial, official and diplomatic levers to help secure the long-term future of the steel industry in the UK” and has urged Tata to agree to a “responsible sales process” of their assets.

He also met with steelworker’s union boss Roy Rickuss who has said that the “steel industry cannot simply be sold off for scrap, it should only be sold to a new owner with the patience to allow British steel making to succeed”.

Gareth Stace, who runs trade body UK Steel, has been positive about Gupta’s proposed acquisition, saying that “it is a very promising step that we’ve got a good, credible investor looking at the business with a view to taking it forward”.

However, he maintained that “those investors won’t be looking at the long term unless they see firmer government commitment to the steel sector. If we don’t see that, we may lose steelmaking in the UK forever and that would be disastrous for the steel sector and the wider economy”.

Speaking to the Financial Times, Gupta said: “either we want a clean asset, which is going to be tough, or we want support to broker a deal that’s going to be equitable.”

According to the FT, Gupta said that in order for him to agree to the purchase, “the government would have to remove pension and environmental liabilities for the Port Talbot plant” and he has also “called for lower power costs for steel plants”.

He is calling for an effective elimination of taxes on a power plant that his groups currently owns, arguing that “if [the government] eliminated taxes on that we’d be the most competitive power provider for steel in the world. We could make power as cheaply as anybody.”

It is Gupta’s company Liberty that is responsible for the Swansea Bay tidal lagoon project, plans for which have currently been shelved temporarily.

He has also called for government support on this project, as well as helping to subsidise the conversion of The Uksmouth power station in Wales from coal and biomass to pure biomass.